Lumberjacks are people too 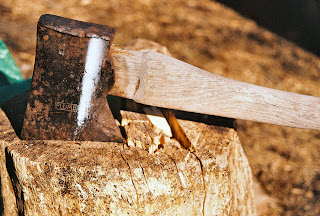 In an effort to keep from rolling myself into the fetal position and giving in to the voices inside my head, I’ve convinced an innocent woman new therapist to take me on as a patient.  I found her through my network provider website, and picked her out of dozens of names because of her close proximity to my house and the fact that she specializes in crackheads life-challenged people like myself.  The good news is, when I called my insurance company and they looked up my modest list of diagnoses, I found out I qualify for something called “severe, lifelong, debilitating, she’ll probably end up in a padded room someday mental illness status,” which means I get unlimited, year-round access to a shrink!

It’s been years since I had this kind of therapy, my parents having spent the majority of my teens busing me between licensed professionals who promised them they were fully capable of excorsising the demons that had turned me into an unbearable heap of hormones.  I resented them for forcing me to talk to these strangers about my innermost thoughts, strangers who, quite honestly, came across as needing some kind of mental interventions themselves. So I’ve avoided therapy like the plague.  Plus, it’s not like anybody ever freaked out over a little ocd, panic, alcoholism, depression, and agoraphobia, right?

But in light of the recent craptastic events which have occured around here, including Andrew’s health problems, quitting a job I loved, and not winning the lottery for like the 100th time in a row, I decided it was time to give therapy another try. And so far, I have to say, it’s going pretty well.  We seem to get along, my therapist and I, except when she tries to give me unsolicited advice. I get plenty of that from my mother; I don’t need to go out and pay for it, know what I mean?

1.  This man was a moron.  He should have become enlightened while he was napping or getting a massage
2.  She wants me to go out and buy an axe
3.  I’m going to need to relocate near a river of some sort.

And even though I don’t really know how becoming a lumberjack will solve my fear of malls and dangerous situations, such as going to a Denny’s outside of my immediate neighborhood, I trust this woman to help me get over my phobias and learn to live again.

Unless she starts mouthing off and giving me her opinions.
Then all bets are off.

Because nobody likes a know-it-all.

3 Replies to “Lumberjacks are people too”