We Should Have Had More Kids, Right?

The panic washes over me suddenly while I’m in the shower.

We should have had more kids, I think to myself.

There is silence on the other side of the door.

He must sense my biological clock is not behind this.

He must sense he should tread carefully.

A simple question spoken with hesitation, knowing the answer is likely complicated.

“We should have had more kids. For Ian.”

My voice rises a few octaves as visions of my little sister and I engaged in sibling banter flash across my mind. “He’ll never have a sibling to truly confide in. To count on.”

The truth slips out before I can contain it. I turn the shower knob to HOT.

I try to turn the shower knob again, but it won’t go any higher.

I picture my sister. Our hundreds of fights, thousands of hugs, almost daily phone calls laced with laughter and unsolicited advice.

“WE SHOULD HAVE PLANNED BETTER!” I yell out. “HE WON’T HAVE ANYONE TO HELP HIM WITH ANDREW.”

“He’ll have us,” he responds gently, and I picture grey hair and portable potties and assigned caregivers bumping in crowded hallways as they scurry on their way to assist someone somewhere demanding something.

“We did the right thing by not having more,” he says, refraining from outright reminding me about the statistics and the finances and the fears that occupied every conversation we ever had on the matter.

But I don’t tell him so.

Dammit, I wish the water weren’t so cold.

We are piled into the car, all four of us, Andrew strapped into the largest car seat we’ve ever laid eyes on.

Mikey calls it The Recliner.

I can’t see shit to the right of me because of it, crossing my fingers every time I have to change lanes.

But it keeps Andrew safe, keeps him comfortable, keeps him from trying to get out of the car while we’re hurtling down the road at 60 mph.

The ride is quiet, my mind still embroiled in a mental tug 0f war about our grave mistake in not having more children. I feel guilty. For all of it. The thoughts, the decisions, the regrets, the what ifs.

Suddenly, Andrew lets out a wild giggle from The Recliner. Ian soon joins him and the quiet car becomes filled with their laughter; loud, ridiculous heaps of hysteria.

I think of my sister; the many years we spent in the backseat of our parents’ car, laughing uncontrollably at something we knew they’d never understand. The kind of conspiring that can only exist between siblings.

I look in my rearview mirror
and all I see is Love. Companionship. Brotherhood. I see a life spent lifting each other up in the ways they know how, even if one is much stronger than the other. I see a relationship I have no right to define by the constricting parameters of my own anxieties and expectations. I see a bond that is unbreakable, one that will only grow stronger with time.

I look in my rearview mirror

and what I see are two boys navigating a relationship that makes sense to them.

Two futures intertwined with one another, in a world that may not get it. And that’s okay.

What I see are two brothers,

and in this very moment,

with their heads thrown back in euphoric joy in the backseat of my station wagon Volvo,

I know that that’s 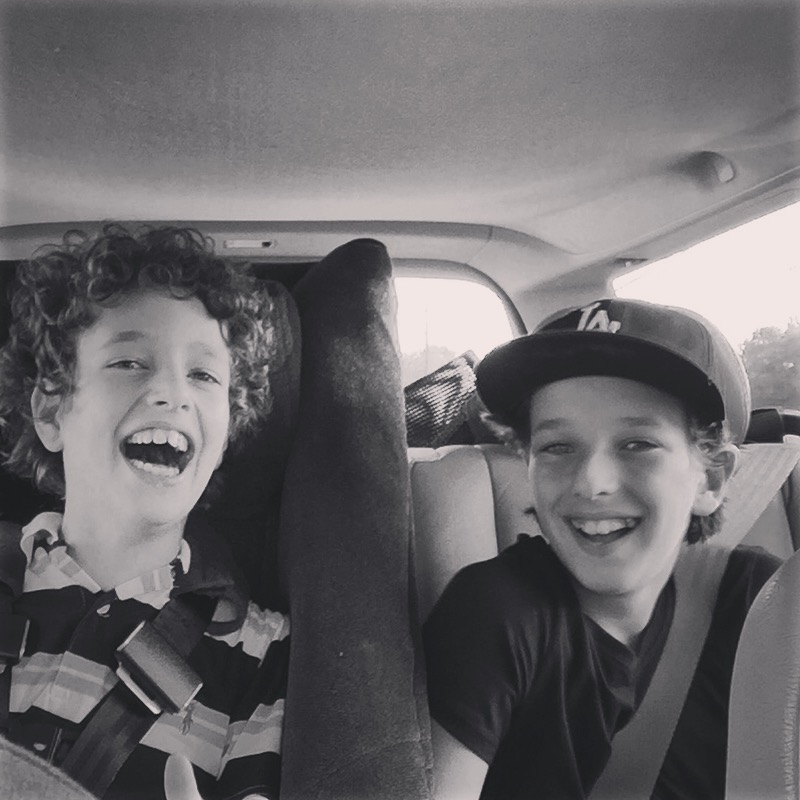 4 Replies to “We Should Have Had More Kids, Right?”