It’s the night before Andrew’s first day of school.

For many years this night held a mixture of excitement and anxiety for me, and after his new outfit and shoes were laid out, and his lunch box was packed, and his backpack was filled with shiny new school supplies, I would lay wide away in bed, endless questions pummeling my already exhausted mind:

“Will he be scared?”

“Will he miss me and feel like I abandoned him?”

“Will they understand his attempts at communication?”

“Will they change his pull-ups or make him sit in a soiled diaper for hours?”

“Will he learn something?”

My desire to have my son kept safe while at school was certainly not unique; I’ve yet to meet a parent who wistfully dreams of their child being mistreated at the hands of school personnel.

But there’s something uniquely terrifying about sending a child who cannot talk, who cannot fend for himself, who would not think twice about running into oncoming traffic or jumping into a body of water, who has seizures and requires constant, vigilant, compassionate attention, into an environment I cannot control and into the arms of people I don’t really know.

(If this is the part where you think he shouldn’t be in school in the first place, I urge you to go $%^@ yourself immediately).

Still, the first day of school brought with it hope for progress; a tentative assurance that this would be the year friendships would be made, goals would be met, and functional language would develop. The heart of a parent raising a special needs child is never short on desires for opportunity and growth and tiny bursts of miracles that hold the promise of a better tomorrow for their son or daughter.  School seemed like the perfect place to unravel our lengthy wish list and let the professionals work their magic.

The first mornings would come, the obligatory photos would be taken, and soon the new school year would be underway. Frustrating IEP’s and staff changes, Andrew’s fluctuating health, and the reality of our country’s special education system would eventually grind potential progress to a halt, and in no time our wish list was put away and we were back to just surviving.

But each year we met the end of summer with the same sense of “This year will be the year GREAT things will happen!” and I would stay up late the night before school, coating crisp apples in homemade caramel sauce and handwriting notecards to new and returning staff, my heart holding on to that tentative assurance that I was right: good things were in store for our Andrew that year.

Until the year they weren’t.

Until the year we found out our worst nightmare had come true.

Until the year we were told about the countless acts of alleged abuse he had been forced to endure during his time at school.

Until the year we finally figured out why he had stopped toileting, why he tore his face apart, why he screamed when he saw the bus pull up to our driveway, why he refused to get onto his favorite mode of transportation, why he lost acquired language, and why our enthusiastic, happy, affectionate son was emotionally and physically unraveling.

It’s been nearly a year and half since we pulled him out of that class, out of that school, out of the hands of the people we trusted to care for and nurture our son. He spent nine months at home with me while I attempted to repair the damage that was done, and though we’ve made tremendous progress, PTSD is alive and well in our house to this very day.

When he finally went back to school late last year – far, far away from the school we left behind – the night before his first day felt suffocating and lonely, and instead of lying in bed trying to sleep through the relentless thoughts, I curled up on the couch and sobbed until the sun came up.

Trust, once it’s shattered, lies at your feet, keeping you from moving forward, forcing you into a life of stagnation, each tiny, splintered piece a reminder of what you once had, what was brutally taken from you. Repairing it seems insurmountable, walking around it feels impossible, and so you’re left to stare at the remnants of a world you will never look at the same way again.

It’s been a rough ride, to say the very least, but I’m holding on. For my family’s sake (and mine).

So here we are, once again, the night before his first day of school.

I feel apprehensive and anxious, and a bit exhausted. But the terror that’s consumed me for so many months has taken a back seat to a flicker of that old excitement and a smidge of hope, though both are a bit battered and bruised.

Healing has invited herself in, and in the most surprising and unexpected ways.

I do not forgive.

And I will never forget.

But I’m looking at something I didn’t think I’d be able to see from where I’ve been standing since last March: A future for Andrew that’s not shrouded in pain and fear. A future for me that’s not consumed by mistrust and resentment. A future for our family that’s not focused on and driven by the horrendous past.

I’m not entirely there yet. I’m just beginning to see the outlines and fuzzy shapes of this future. But it’s there. I just know it.

So while the journey continues towards something better than I’ve imagined in a very long time, I’m committed to taking baby steps to help us all get there.

Which is why tonight, the night before school starts for Andrew again, I find myself in the kitchen, stirring brownie batter and cutting out custom gift tags, the house filling up with the smell of a few simple ingredients fusing together to create something spectacular.

I find myself looking forward to seeing the familiar and kind faces of the van crew that picks Andrew up each day. I find myself daring to hope there is more good than evil, and that my son will be placed in kind, competent hands.

I find myself hoping Andrew’s new shoes won’t give him any blisters.

I find myself living in a new reality, where salvaged parts of my old life quietly take their place among the complicated characteristics of my new one.

I find myself feeling almost normal,

for the first time,

in a long time. 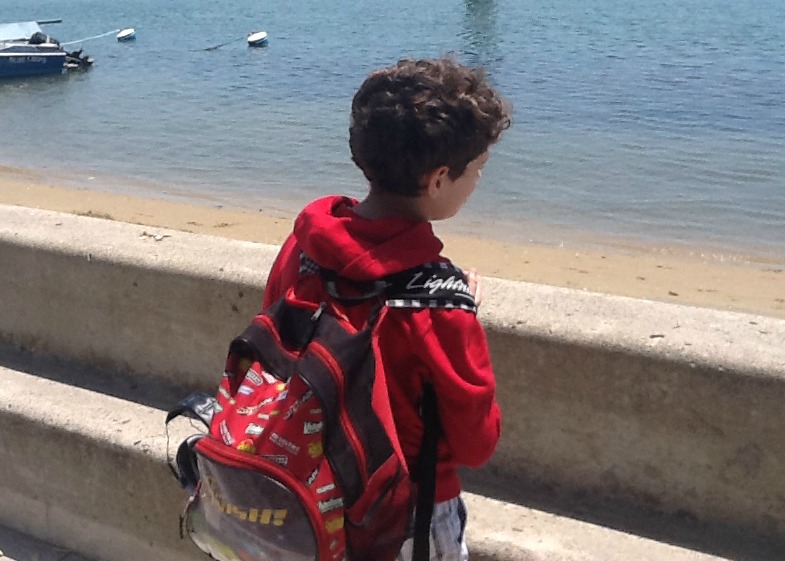 One Reply to “The Night Before”