Why Banning Devices for Kids is a Stupid Idea 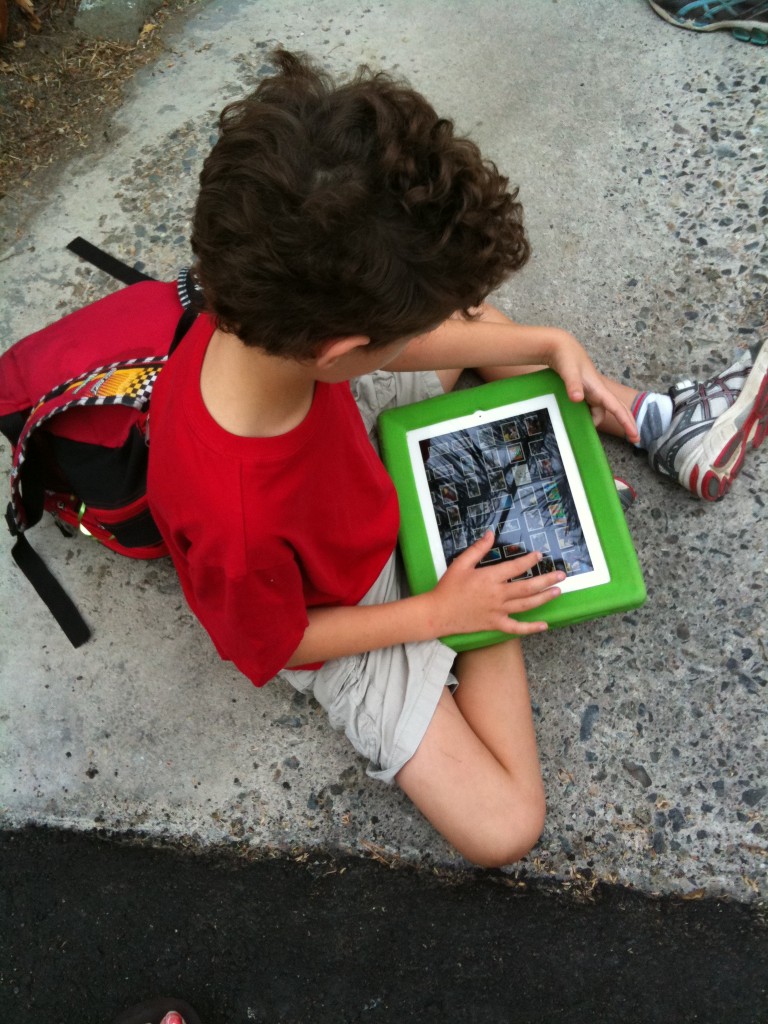 So I just finished reading an article on Huffington Post entitled “10 Reasons Why Handheld Devices Should be Banned for Children Under the Age of 12,” and thanks to author Cris Rowan’s compelling arguments, I’ve removed all of the devices from the Ashline household in the hopes that it’s not too late for my precious children and I can somehow undo the emotional and developmental trauma they’ve endured as a result of their iPads.

The fear-mongering in this piece is beyond outrageous, including blaming exposure to technology during early childhood on everything from mental illness to intellectual disabilities to “… increased use of restraints and seclusion rooms with children who exhibit uncontrolled aggression.”

Children are not being put in restraints and seclusion rooms because of the side effects of handheld devices. In fact, the majority of children being put in restraints and seclusion rooms have special needs and are forced to rely on behavior – such as scratching, biting, hitting, kicking, and  self-mutilation – in order to communicate because they don’t have access to proper technology – such as handheld devices like the iPad – to assist them in their communication efforts. Another reason kids are ending up restrained and placed in seclusion? Poorly trained staff, lack of appropriate supports, and archaic approaches to behavioral intervention, to name a few.

An iPad mini never put my 50 pound, non-verbal, epileptic son in a floor prone for 12 minutes, that much I know.

I also want to touch upon the use of the word “ban,” in this piece. It’s a buzzword meant to cause alarm and scare moms and dads into submission. First of all, if you’re worried at all about your child getting too much screen time, then Rowan’s article – which is filled to the brim with frightening “statistics” ( I use that word loosely as she irresponsibly attempts to imply correlation as causation throughout her post) then you’re likely already implementing screen time with a balanced approach, and your child is doing just fine.

If, however, your 2nd grader is spending his free time playing “Grand Theft Auto V,” then what you have is a parenting problem, not a technology problem and banning devices isn’t going to eradicate crappy moms and dads. In fact, crappy moms and dads have been around long before handheld devices ever came on the scene. Back then, kids took to the great outdoors to engage in inappropriate behavior and beat each other up, instead of doing it from the comfort of their couches. The only real benefit of the good ‘ol days was that even though kids were getting into all sorts of trouble, at least everyone got their daily allotment of Vitamin D.

Guys:  The key to a healthy, happy, nurtured child is a parenting style that’s balanced, fair, educated, intuitive, loving, and realistic. Suggesting that we ban everything that may hint at a correlation with a negative influence or potentially hazardous outcome would mean we would have to BAN EVERYTHING. The only thing we should ban – crappy, self-centered parents who assume zero responsibility for the welfare of their offspring – is the one thing we can’t, so experts start listing off all the things we should remove from society instead.

Finally, allow me to give you the other side of handheld devices, since Rowan was so keen on providing an article geared towards that anxiety-ridden part of you that keeps you up at night wondering if you’ve permanently screwed up your kids (the short answer is yes, you’re human, you’re gonna make mistakes, but I promise, if it’s a monumental one, it likely won’t involve purchasing one too many alphabet apps for your preschooler).

My special needs son was given his very first iPad at the age of 9. If Rowan had her way, he would have had to wait until this Wednesday, when he turns 12, to receive his first handheld device, and then, he would only have access to it approximately 30 minutes per day. To this, I say, “Blllllrrrrrrrrrrrrrrrrrrrp.”

Thanks to his evil iPad, Andrew finally has a way to communicate with the outside world. He’s also learned his alphabet, how to count to 20, and is learning to sight read. That’s right. My non-verbal, intellectually impaired son, who spent years upon years tortured by worthless worksheets and relying on what equated to rudimentary charades to convey simple needs such as hunger and thirst, has been given FREEDOM thanks to his handheld device.

There are thousands of kids like him, relying on these devices for speech, academics, and learning basic concepts you and I take for granted, such as emotions, personal boundaries, and safety and life skills. There are millions more who could stand to immediately benefit in life-changing ways from the use of this miraculous technology that literally puts access to the world in the palm of these children’s hands.

Andrew goes nowhere without his devices, and has two: One dedicated purely to communication, and one that is used for learning and entertainment. Both serve invaluable purposes and both are front and center in his daily life.

According to Rowan’s article, my kid is screwed.

Except he’s not. And neither are your kids.

Dude. If you’re super worried about it, buy some Eco-friendly, non-toxic blocks, bust out your favorite pan flute CD, and schedule in some sun salutations with your kiddo throughout the day. Then, when it’s time for lunch and you need 20 minutes to finish your hemp seed quinoa salad, harness the power of your nearest handheld device by handing it over to your child so you can finish cooking without losing your bleeping mind.

In other words, take a deep breath, and take articles such as the one Rowan has written with a grain of salt. You’re much better off worrying whether or not your child is being a kind, compassionate, world citizen.

I took a video of my son Andrew using his evil handheld device today. Check it out and see the horror for yourself!