The Healing Nature of Conga Lines 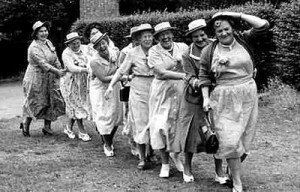 Maybe it’s because I first felt the freedom of sobriety at a wedding.

Seventeen days after my last drink, my family and I drove to Las Vegas to see my cousin get hitched.

The place to be when you want to stop drinking.

It was there, in the grand ballroom of a local casino that I had what some (including me) would refer to as a spiritual awakening.

I had spent the better part of the day trying to convince my husband that having one ice cold beer wouldn’t hurt, that I had proven my ability to control myself these last two weeks, and that I DESERVED to enjoy myself, dammit.

The insanity is invisible until you are far enough away to see it for what it is: the suffocating clutches of an unrelenting disease.

But my husband, bless his ginormous, unwavering heart, had made a pledge before our trip to steer clear of the free booze so that I wouldn’t feel alone or singled out and he patiently waited by my side for the tantrums to end.

It was right before the toast, as my uncle (the father of the bride, who had no idea that I was a raging alcoholic), offered to pour me a glass of champagne, that I believe God intervened.

Normally I would bypass the glass and drink straight from the bottle.

Instead I did something shocking.

“No thank you,” I said calmly and without a second thought as I pushed the glass away.

It was a response that both felt so right and startled me.

It felt like an out of body experience. And with those three words my urge to drink, which had been plaguing me the entire trip, was suddenly and inexplicably gone.

I spent the remaining hours of the reception dancing my ass off, eating way too much food, and watching as guests who had previously appeared perfectly normal became drunken banshees with zero respect for personal space.

And then I did something I will never forget.

I led the conga line.

In a way, it wasn’t surprising. I had had my fair share of moments on the dance floor over the years, but most of them involved copious amounts of liquor and absolutely no regard for the safety of others.

This time, it was different.

The look on my husband’s face as he realized his wife was at the head of a 100+ person dancing sensation was a mixture of fear and disappointment.

He thought I was drunk.

And who could blame him?

When the conga line finally dissipated, I walked over to my husband, threw my arms around his neck, stared him straight in the eyes, and breathed in his face. I wanted him to see that it was me. All me.

“See baby? I told you.” He said. “I’ve always told you. This is who you are. Without the alcohol. This is you. You, my darling, always are, and always will be a conga line leader.”

That night was more than a turning point.

It was a rebirth.

And that conga line became a symbol of the new path I was on; I wasn’t exactly sure where I was headed, but I knew it was someplace infinitely better than where I had been.

Of course that doesn’t mean that life has been all rainbows and puppy dogs since then.

The difference now is that I choose my reaction; I manifest my own healing.

I live life on life’s terms and no longer buy into the bullshit that a few drinks will make it all better (though I can’t say the same for carbs).

Most importantly though, is that I try to take the time to remember the unfiltered joy I felt that night, when for just a few minutes I blazed a path while others followed.

It’s something I’ll always treasure and never take for granted.

And it’s something I make sure to indulge in every once in a while.

Which is why when I watched a friend marry the man of her dreams this past weekend,

there was no doubt in my mind that I knew what I had to do.

And when the music began to pulse

and I could feel the beat in my bones

I stood from my seat

took off my shoes

smoothed the wrinkles from my dress

I led the damn conga line.

Cousin, who just read this post, managed to find the original photo from that fateful day. There I am, in the front, sober and having a blast. Who knew?

5 Replies to “The Healing Nature of Conga Lines”