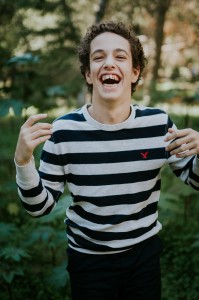 UPDATE: There is a wonderful update to this story, so once you’re done reading this and you’re all fired up, head over here to hear about
the aquarium’s response.

My son was kicked out of an aquarium today.

My non-verbal son with special needs – who was with his class and support staff on a community outing to a local aquarium – had to leave because he was flapping his arms and making joyful noises while watching water pour into a large tank filled with sea anemones.

How miserable do you have to be to complain about an overjoyed kid marveling at something most of us take for granted?

How pitiful do you have to be to see someone with developmental disabilities and not make space for that person’s unique form of communication?

How pathetic do you have to be to ask the staff to do something about that annoying disabled kid?

And to the staff at Cabrillo Marine Aquarium in San Pedro, how spineless do you have to be to accommodate some ignorant, insensitive jackass instead of sticking up for my son, who you were informed had a severe form of autism, and who had every right to be there and enjoy the experience, even if he expressed his enthusiasm in a way others may not understand?

With so much anxiety and divisiveness going on, with so much tragedy and heartbreak at the forefront of every news story, THIS is what offends you?

You’re lucky I wasn’t there.

While my son’s school staff may have attempted to intervene in a calm and respectful manner, I would have exercised far less patience and understanding. Partly because I’m a dick, but mostly because you’re not the first person to assume your existence is more valuable than my son’s. You’re not the first person to assert your dominance in a public place and claim you have more of a right to be there than my child.

And Cabrillo Marine Aquarium, you’re not the first place of business to discriminate against my Andrew, and you won’t be the last, but trust me when I say mine is not the family you want to be messing with. I have a big mouth and I’m not afraid to use it, especially when I’m using it to say the things my son cannot.

I’m grateful Andrew has always been welcome at The Aquarium of the Pacific, where hand flapping and happiness aren’t considered defects and my son isn’t regarded as a public nuisance. And I’m even more grateful his teacher and support staff attempted to advocate for him and made sure to contact me to let me know exactly what happened.

If you’re wondering just how horrendous Andrew was being, his 1:1 behavior interventionist managed to get video of  the visual and auditory injustices everyone had to endure. Trigger Warning: Happy boy in wheelchair flapping his arms vigorously and emitting sounds of joy.

Andrew flapping and happy at the aquarium

Like I said. This isn’t the first time, and it’s certainly not the last. But I’ll be damned if I don’t make people think twice before they try to pull this kind of shit with someone else.