“I can get you in on the 12th of February at 4:15 p.m.”
“Wonderful. Thank you Dr. Marci. In the meantime, can we start decreasing some of the meds? It just seems like so much.”
“I want to decrease the Klonopin first, but in order to do that, we have to go up on the Depakote. So increase the Depakote evening dose by 125mg and in two weeks do the same for the morning dose and then we can talk about decreasing the other two meds.”
I am rolling my eyes now at the phone, trying hard not to stick my tongue out too.
Real Mature Jo.

Epilepsy came into the picture two months after Monchich’s autism diagnosis, almost five years ago. It started so innocently. We thought he was falling asleep in his highchair during meals and even giggled at some of the faces he was making.

But it wouldn’t stop.
It got much worse.

And one week later he was dropping in the front lawn, conscious but immobile, unable to fight against the seizures taking over his tiny two -year- old frame.

Helmets, homeschool, surgery, hospitals. Those were words we were throwing around eight weeks after they told us he was severely autistic. That’s when the Merlot began to flow and I started to shut down.

Several neurologist consults later, monchichi was on his first of many medications, and we kept our fingers crossed, hoping this would do the trick. When the seizures progressed, the “Out with the old, in with the new” game began.

And we are still at it.

After his major seizure breakthrough in July, when he had over 100 episodes in less than 12 hours, we added a third drug, Depakote, to the mix.

Now you can barely see his morning yogurt or evening pudding through all of the pills. And each time he swallows them, I am struck with an odd combination of feelings….like I am curing him by poisoning him.

Which is the lesser of two evils?

Of course he can’t function without the meds. His seizures would take over his life. He would be so limited; it’s not even a possibility. But three very strong drugs? With a zillion different side-effects just lurking around, ready to strike at any moment?

It scares me.
So we do blood labs
And renal ultrasounds
And make sure things are working properly.
And we wonder how much the medications are clouding his already fuzzy and fragile mind.

He is such a trooper.
And sometimes I am just getting by.

So tonight I will add more chemicals to his thick chocolate pudding, hoping they do the trick so that I can start flushing the other pills down the toilet.

That will be a holiday in this house. 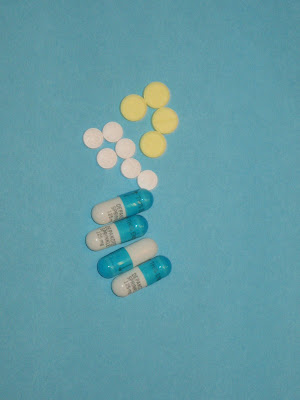 *Got milk? Monchichi’s daily cocktail. In an imperfect world, these drugs give him a chance at a normal life, and I know in my heart we will figure the rest out*
Spread the love