From Proud Mom to Bigot

So this is why people fear speaking up and speaking out and making their opinions known; because there will always be someone out there who will twist and mangle and misinterpret their message to make it fit their own agenda.

Good thing I don’t give a damn.

In the past 24 hours, since my SUCK IT AUTISM post went up, self-advocates on the spectrum have called me more names than I can keep track of, some of which, like curebie, I had to look up on google.

At first I was mildly amused, then briefly annoyed, and for a split-second I even felt a little famous when I got my very first threat via a Facebook message:

“If you’re out here, Jo, keep your TACA people nearby. I have no use for curebies.”

The gentleman has since apologized, and I’ve accepted, because that’s what us BIGOTS do, but it still counts, right? Because I would hate for it not to count since it sort of made me feel important and like maybe I needed to start traveling about town with an entourage or something.

This morning, my post was dissected by Landon Bryce, autism self-advocate and webmaster for thAutcast.com -A Blogazine for the Aspergers and Autism Community – and he has all kinds of fun interpretations about my intentions behind my post, though my favorite has to be when he suggests that I was abusing Andrew:

“I think Ashline’s use of a picture of her own son in order to try to show how awful her life is and engage the reader’s pity is cruel and disrespectful.  It makes me concerned about abuse.”

You know what I was thinking the entire time I was reading his blog this morning? How fucking amazing it would be if Andrew was ever able to defend himself and his friends and loved ones like that. How fucking insanely happy I would be if he could sit in front of a computer and string coherent and intelligent thoughts about something he was passionate about. How I would give ANYTHING to know that his would be a life filled with conversations and disagreements and debates.

How quickly a mother’s raw and unfiltered expression of hope for her little boy can be savagely pissed on by a group of people I’m guessing don’t wear pull-ups and pull their pants down in the middle of the school yard while fellow classmates stare in judgment. I’m also betting that while they’re busy calling me names they aren’t simultaneously playing with their shit, because they KNOW BETTER.

That’s what I want for my Andrew.

To be able to live a life where he’s not playing with his own shit because HE KNOWS BETTER.

So if that makes me a curebie, or a bigot or a child abuser or an ableist or whatever other fucking word du jour you come up with, so be it. You guys are just a bunch of bullies. You bully parents like me who want more for their kids and you do it all from the comfort of a life we would give anything to be able to promise our own children.

You took my message out of context and used it to make yourselves look like the victims, when the real victims here are the very children parents like me are trying to save; children who are easily overlooked, children who are in physical and emotional pain,  children who will someday be adults that society will have no idea what to do with so it’s OUR JOB TO FUCKING FIGURE IT OUT.

Which is why I will continue to tell autism to SUCK IT; so that maybe someday, if Andrew is confronted with something or someone he doesn’t like or agree with, he too can express and defend himself and give them hell.

But in the meantime, I’ve got his next couple of flashcards ready to go: 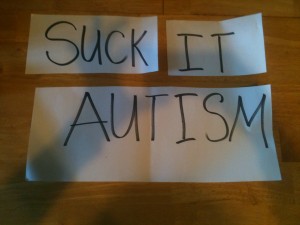 Oh, and the bumper stickers and t-shirts are in the works.

51 Replies to “From Proud Mom to Bigot”