Son of a Biscuit 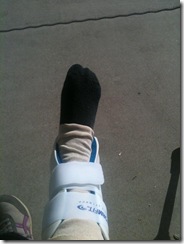 I fell down the stairs last night while giving Ian a piggy back ride.

I slipped and fell backwards and Ian hit the edge of one of the stairs with the middle of his back.

But enough about him.

In an attempt to spare him having all **5 pounds of mommy landing on top of him, I used my right foot and ankle as landing gear and as soon as I did it I knew I was screwed.

The pain knocked the wind out of me, but I was coherent enough to witness that:

1. Out of the half a dozen or so eyewitnesses that were present, only 2 sprang into action while the rest tried to ascertain the seriousness of the situation from the comfort of the dining table.

3. Ian was the first to be triaged, and I’m assuming it’s because he was crying louder than me.  I’m going to have to work on that.

4. No one offered to carry me down the stairs to my bedroom.  I’m going to go out on a limb here (ha!) and say it was because they wanted to spare me the humiliation and not because they were concerned with the laws of gravity.

I managed to make it downstairs by scooting on my butt, breathless the entire way.  I have a pretty high threshold when it comes to aches and pains, but this was a doozy.  I knew immediately after it happened that my foot wasn’t broken, but I also knew that a bedpan was not necessarily out of the question.  When I mentioned this to my husband he looked slightly nauseous and appeared a bit faint, but I think he was just super worried about me.

I endured the Oscars (not sure what was more painful, to be honest) and went to bed hopped up on extra strength Tylenol.  It was a sleepless night but not the kind that you brag about to your friends.  The morning brought more pain and I struggled with:

1. Watching Mikey NOT do things my way as he got the kids ready for school and packed their lunches.

2. Watching Mikey NOT listen to me as I micromanaged from the couch.

3. Watching Mikey walk away when he had had enough of my unsolicited advice, knowing full well that I couldn’t run after him.

4. Determining the distance between Mikey and my left crutch.

It wasn’t until everyone had left and I was stuck watching The Suite Life of Zack and Cody, the remote clear across the room on the other couch, that the severity of my situation began to sink in. Luckily I was able to get an early afternoon appointment to see a local Orthopedic Surgeon.  My best friend drove me and my husband met me there.  The concerned look on his face filled me with warmth and love. “Seriously?  You steal my brand new socks everyday and then you wear your most hideous pair to the doctor’s office?”

At this point the pain was getting worse and worse, and in the intensity of the moment I began to say things that made no sense:

“I’m so sorry I was so unpleasant this morning; it’s not your fault you don’t know the kids’ morning routine by heart. It’s my fault for assuming you should know what to do instead of realizing that you are at the office and not aware of our schedule.”

Obviously I was delirious at this point.

After taking some x-rays and moving my foot around until I yelped in pain, the doctor confirmed my worst fears:

I’m a moron who needs to watch where the hell I’m going, or at least let my son soften the fall next time.

Also, I sprained my ankle.