I was helping my grandmother up the stairs last night, and by helping I mean she was grabbing the handrail while I had her butt cheeks in both hands, shoving her against gravity until we both reached the top breathless; she from the exertion of hoisting herself up, I from having to inhale a couple of rogue after-dinner farts that she swears were an accident.

The entire way up she was singing a little ditty I remembered from my childhood; a sweet little song about a little fish and…….something about a……….wait a second.

I had heard this song many, many times in my life, but last night, I heard it.

As in, I paid attention to the words:

which, word for word translates to:

Only in my house would an 85 year old woman sing her heart out about an aquatic vajay-jay.*

Kinda puts Nemo in a whole new light, doesn’t it? 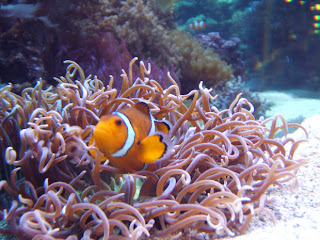 God I love my life.

*My grandmother, who survived WWII in Poland, was widowed in her thirties, and raised three kiddos on.her.own in a country where bread and butter were scarce commodities is a rock star, and as far as I’m concerned, she can sing about any damn thing she wants to.  And that includes but is not limited to dirty little ditties about the gynecology of fish.

We need to be honest with ourselves, acknowledge o

Heartbreaking. True. What are WE, white people, go

Having their baseball seasons canceled was such a

When your sister, who’s a culinary genius, makes